The official plot involves confronting a danger the likes of which the world has never seen before. 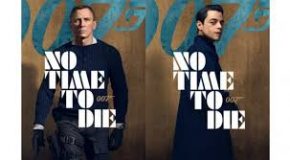 And with that in mind, those behind the new Bond film, “No Time to Die ” have released a promotional poster featuring Oscar-winning “Bohemian Rhapsody” star Rami Malek as Bond villain Safin.  He apparently has dangerous new technology to use against the world’s most famous secret agent.

According to the official synopsis, Bond has left active service when his friend, CIA operative Felix Leiter, enlists his help in the search for a missing scientist.

Bond 25 is expected in theatres in April of next year.