The Conservatives are calling on Finance Minister Bill Morneau to deliver an “urgent” fall economic update, including a plan to get back to balance. 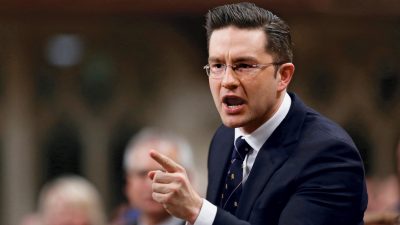 Conservative MP Pierre Poilievre, the finance critic, says he wants to see the Liberal government provide a fiscal update before the holidays that would include tax cuts for entrepreneurs, efforts to get rid of regulatory red tape and a plan to phase out the deficit over the next few years.

The Ottawa-area MP notes the country lost about 71,000 jobs last month, according to Statistics Canada, which was the biggest monthly drop since the financial crisis of a decade ago.

Meanwhile, the American unemployment rate is the lowest it has been in half a century.

The re-elected Liberals promised during the fall election campaign to reduce the deficit to $21 billion by the fourth year of their mandate, while the Conservatives had promised to deliver a $667 million surplus in 2024-25.

Poilievre says the Liberals have had plenty of time since the October election to prepare a fiscal update.