Marathon international climate talks in Madrid have ended with major polluters resisting calls to ramp up efforts to keep global warming at bay and negotiators postponing the regulation of global carbon markets until next year. 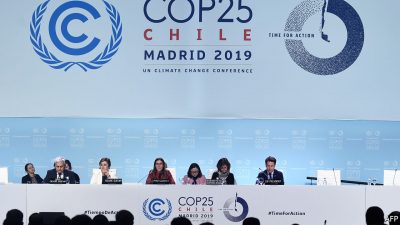 Those failures came even after organizers added two more days to the 12 days of scheduled talks.

In the end, delegates from almost 200 nations endorsed a declaration to help poor countries that are suffering the effects of climate change, although they didn’t allocate any new funds to do so.

The final declaration called on the “urgent need” to cut planet-heating greenhouse gases in line with the goals of the landmark 2015 Paris climate change accord.

That fell far short of promising to enhance countries’ pledges to cut planet-heating greenhouse gases next year, which developing countries and environmentalists had lobbied the delegates to achieve.

The Paris accord established the common goal of avoiding a temperature increase of more than 1.5 degrees Celsius by the end of the century.

So far, the world is on course for a 3- to 4-degree Celsius rise, with potentially dramatic consequences for many countries, including rising sea levels and fiercer storms.

The European Union and Canada have been some of the few large emitters to show ambition by adopting plans to become carbon neutral by mid-century, but activists said that their leadership failed to resonate among others.

About 80 countries, less than half of those taking part in the talks and accounting altogether only for about one-tenth of global emissions, have expressed intentions to upgrade their pledges next year for net zero emissions targets by 2050.