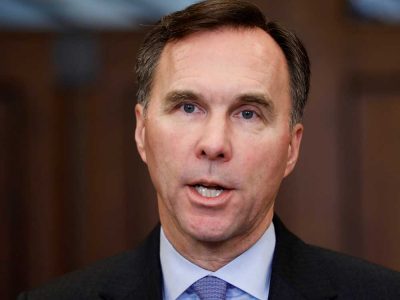 It says the deeper deficit is largely due to changes to how employee pensions and benefits are calculated and to a tax break set to take effect on the first of January.

Still, Finance Minister Bill Morneau is painting a fairly rosy picture of the Canadian economy, with growth of 1.7 per-cent projected for this year and 1.6 per-cent in 2020.

He says the Conservatives would make major tax cuts for workers and entrepreneurs, eliminate unnecessary regulatory red tape, and reassure international investors with a realistic plan to phase out the deficit.

Morneau will open a two-day meeting with provincial and territorial finance ministers Monday evening over dinner.