He’s been the recipient of many awards including two Junos, an induction into the Songwriters Hall of Fame, Billboard’s Hit Parade Hall of Fame, the Canadian Music Hall of Fame, and he has a star on Canada’s Walk of Fame. Now, Zoomer music legend Andy Kim is going to be recognized in his home town of Montreal. 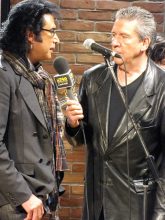 The 73 year old friend to ZoomerMedia will be honoured this coming Friday with a Canada Walk of Fame Hometown Star which will be unveiled Friday in front of Place des Arts.

Andy is the first Montreal native to receive the honour and he’ll be there in person.

“I’ve lived my life away from Canada and away from the winters of Montreal, and a few years ago, I decided that I’m not going to phone it in, but see if there’s a community I can be part of,” Andy said in anticipation of receiving his star and performing in Montreal.

On Friday night, he heads inside to host and perform in his annual Andy Kim Christmas Show, similar to the Christmas benefit concert he’s been hosting in Toronto for the past 15 years and which took place earlier this month.

The buzz is that Montreal native Leonard Cohen who was recently posthumously inducted into Canada’s Walk of Fame, will be the next Montrealer to be added to that city’s walk of fame.