With little hope of an agreement, a second day of scheduled talks to get Ontario’s public high school teachers a contract has been called off for today.

Representatives with the Ford Progressive Conservatives and the Ontario Secondary School Teachers Federation sat down Monday under a media blackout in an effort to negotiate a new deal to end a labour dispute that has resulted in a series of single day strikes by teachers. 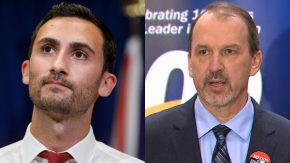 Lecce put out a statement saying he’s frustrated and disappointed with the OSSTF because of their request to increase compensation. But OSSTF President Harvey Bischof says compensation did not even come up for discussion on Monday.

Bishchof confirms this means another single day strike will move forward in 10 districts across the province Wednesday.