50-PLUS WOMEN WHO LOSE WEIGHT AND KEEP IT OFF REDUCE BREAST CANCER RISK BY UP TO 32 PERCENT: RESEARCH

New research suggests women over the age of 50 can reduce their risk of developing breast cancer if they shed some weight. 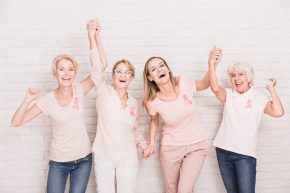 Scientists with the American Cancer Society studied more than 180,000 women over several years and found that those who lost weight, even as little as two kilograms or about 5 pounds, and kept it off consistently were less likely to be diagnosed with breast cancer.

And they found losing eight-and-a-half kilograms (or just under 20 pounds) or more cuts the risk of developing breast cancer by up to 32 per cent.

Women who had a Body Mass Index greater than 25 who lost weight benefited the most.

The risk was lower in all who lost some weight as long as they were not on hormonal therapy, which can increase the risk of breast cancer on its own.

You can read about the study in the Journal of the National Cancer Institute.