A plane crash in Iran Wednesday has killed 63 Canadians. 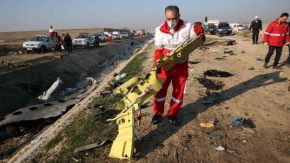 The Ukraine International Airlines’ flight went down shortly after take-off in the capital Tehran. It was en route to Ukraine’s capital, Kyiv. All 176 people on board were killed.

Ukraine’s Foreign Affairs Minister confirmed the deaths of the Canadians as well as 82 Iranians and 11 Ukrainians.

Word from Ukraine International Airlines is that most of the passengers on the Boeing 737-800 were transiting through Kyiv to other destinations including Toronto.

The Ukrainian embassy to Iran is citing preliminary information in saying engine failure caused the crash of a Ukrainian airliner in Iran, rather than a missile attack or act of terrorism.

Iranian media blamed technical problems and quoted an aviation official who said no emergency had been declared.

Reuters is reporting that the head of Tehran’s civil aviation organization was quoted as saying Iran will not give the black box of the crashed Urkrainian airliner to planemaker Boeing.

He also says it was not clear which country Iran would send the box to, so that its data could be analyzed.

Global Affairs Canada did not immediately respond to a request for comment.