He’s usually attired in a bespoke and immaculate tuxedo or suit, but this time out, the world’s most famous secret agent has a new weapon in the closet. 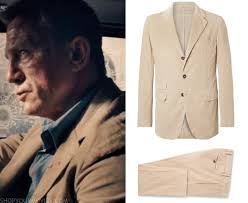 In the latest Bond flick, “No Time to Die,” the famously slick spy gets attired in a fabric often associated with 1970’s literature professors.

The opening scenes, show Bond wearing the suit made of corderoy during a car chase with the mysterious Dr. Madeleine Swann in tow and while jumping off a bridge minus a harness or parachute.

And that’s not all that’s changed.  Apropos of the #MeToo movement, Bond is confronted by a female double “O”, who tells him, “The world has moved on.”

“No Time to Die” is expected in theatres in April.