AFTER THE EXTREME COLD, TORONTO IS IN FOR A SIGNIFICANT SNOWFALL SATURDAY

It won’t be as cold Saturday as Friday, but we are in for a significant snowfall. 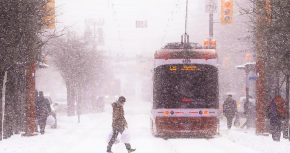 Environment Canada has issued a Special Weather Statement for much of Southern Ontario including Toronto.

An approaching low pressure system will bring snowfall to southwestern Ontario beginning overnight on Friday, which will spread eastward to the Golden Horseshoe area Saturday morning and then into Toronto.

Here in the city, we could get between 10 and 15 centimetres of snow, which change over to periods of rain later in the afternoon. Strong wind gusts of up to 60 kilometres an hour may also create areas of local blowing snow.

By Sunday, we’re into some flurries but the bulk of the system will have moved east.