KEEPER OF THE TOLKEIN LEGACY DIES

The keeper of the legacy of fantasy writer J.R.R. Tolkein, has died in France at the age of 95. 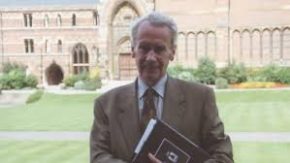 Christopher Tolkien, guarded this father’s legacy and was, like his Dad, an Oxford linguist and like his father, spent much of his life devoted to and surrounded by, books.

Both men were scholars of Old and Middle English and both lectured at Oxford. But, while the elder Tolkien was a specialist in old Anglo-Saxon sagas, the son was an authority on the reams of writing that his father produced.

Long after his father died in 1973, Christopher Tolkien worked to keep the stories of “The Hobbit” and “The Lord of the Rings” alive for readers.

As literary executor for the Tolkien estate, he compiled and edited much of his father’s work including “The Silmarillion” and the collection “The History of Middle-earth.”

He is also credited with creating the map of Middle-earth in 1954 which is now held by the British Library.