The man known as the “Indiana Jones of the Art World” has scored another success. 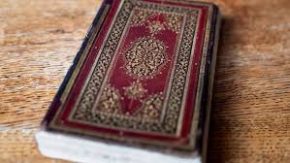 The gold-leafed volume is one of the oldest surviving copies of the “Divan of Hafez” and worth worth more than a million dollars.

It went missing from the collection of an Iranian antiques dealer after his death in Germany in 2007.  Brand tracked it down via the murky stolen arts underworld and says he’ll travel to Munich next week to turn the Divan over to German police.