TWO PEDESTRIANS HIT ON TORONTO STREETS MONDAY EVENING, ONE IS IN LIFE-THREATENING CONDITION

There have been two more collisions involving pedestrians on Toronto streets.

Toronto Police say a man in his 60’s was taken to hospital with life-threatening injuries at about 8:30 Monday evening, after he was struck by a vehicle in the area of Dundas Street West and Scarlett Road. Investigators say the driver remained at the scene.

And earlier in the evening, a woman was injured after she was hit by a vehicle in the area of Morningside Avenue near the 401. The motorist in that collision also remained on scene. 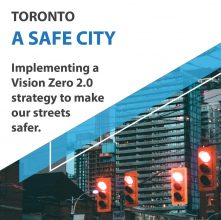 In June of last year, Mayor John Tory announced Vision Zero 2.0, an updated version of the city’s three-year-old plan that has, so far, failed to reduce the rate of traffic-related incidents in Toronto.

In 2019, 42 pedestrians died on Toronto’s streets and 2020 is already shaping up to have similar results.