British Broadcasting Legend Nicholas Parsons has died after a brief illness at the age of 96. 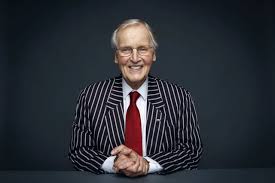 Parsons had hosted Radio 4’s “Just A Minute” on the BBC since its inception in 1967 and had fans right around the world.

“Just A Minute” centred on a panel of guests being asked to speak for a full minute on a single subject without hesitation, deviation or repetition.  The guests were often comedians and writers.

Parson’s also made appearances on “The Benny Hill Show” and fronted other programs on ITV.

Nicholas Parsons, who was made a Commander of the British Empire in 2014.