With all four major teachers’ unions engaged in job action with the province, this week is shaping up to a challenging few days of Ontario parents. 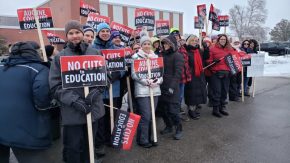 Elementary teachers have walked out in seven districts today will ETFO workers in all school boards across the province taking another day of action on Thursday.

Talks between the province and ETFO broke down late last week.

Meanwhile, high school teachers are also resuming their rotating one-day strikes this week after suspending them for student exams.

Catholic and French teachers do have talks scheduled with the government this week but are also currently engaged in work-to-rule campaigns.

The government insists teachers are concerned primarily with getting more money from the government but the unions contest they’re concerned about issues like class sizes and the province’s introduction of mandatory e-learning for some courses.

Teachers are angling for a two percent raise to keep up with inflation while the government insists they can’t go more than one percent over three years due to the province’s financial situation as well as legislation capping public sector wage increases that was passed last year.