The Emmy-winning producer and director who was involved with some of the best loved TV shows of the 60s, 70s and 80s has died at the age of 96. 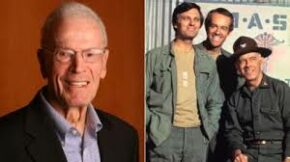 Gene Reynolds was the driving force behind both “M*A*S*H” and “Lou Grant.”

He started out as a child actor appearing in some 80 films and TV shows.

By the 1960’s he was directing episodes of shows like “Hogan’s Heroes,” and “F Troop.” He then helped develop “M*A*S*H” and “Lou Grant” for television.