There is no school Friday February 14th for Toronto public and catholic elementary and high school students, but not because of a teacher strike. It’s a pre-set P.A. Day.

There are some rotating teacher walkouts on Friday, but none in the GTA.

And still, there are no dates for resumed negotiations to get members of the four major teachers federation a new contract. 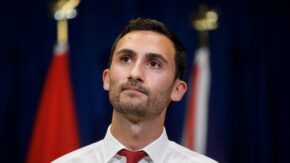 “And I would argue, the people of Ontario want everyone to make some modest moves towards a deal,” Lecce explained, “It really does take two to tango. It’s not an expression, it’s a reality at the table. And so, I think if you’re a parent listening, know that I have given my team the latitude to drive a deal. I need the unions to do the same.”

Lecce has been insistent that teachers need to settle for one percent annual salary increases, while teacher representatives are looking for the Ford Progressive Conservatives to roll back education cuts.

Unless new deals are reached, all teachers in all boards across the province are planning to go on a massive strike on Friday February 21st.