The federal Indigenous services minister arrived for a meeting today with representatives of the Mohawk Nation to discuss a rail blockade that has shut down rail services across Eastern Canada. 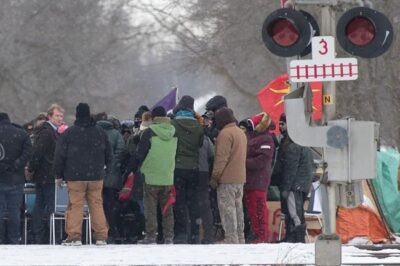 Marc Miller says the situation is “very tense, very volatile” and it is time to talk as members of the Mohawk Nation block the line in support of the hereditary chiefs of the Wet’suwet’en in their opposition to a natural gas pipeline across their traditional territory in northern B.C.

The blockade on Tyendinaga Mohawk territory near Belleville, Ontario, is in its 10th day.

Miller requested the meeting to “polish the silver covenant chain,” which the Mohawks say refers to one of the original agreements between the First Nation and the Crown.

Similar blockades across the country have cut both passenger and freight rail services, with pressure mounting on the federal government to end them.

Canadian National Railway obtained a court injunction to end the demonstration on February 7th, but the Ontario Provincial Police have not enforced it.