THE SHAT SAYS GOODBYE TO KIRK

Zoomers of a certain age will no doubt be disappointed, but James Tiberius Kirk, is finally done with Starship Command. 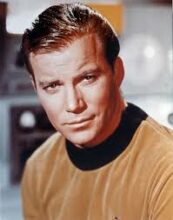 James T. Kirk, played by Canada’s William Shatner, kicked off a five-year mission to boldly go where no man has gone before in 1966.

Kirk, or rather Shatner, who was born in Montreal, is now 86 and when asked if he’d reprise the character, he said Kirk’s story is pretty well played out.

Shatner played Kirk from 1966 to 1969 on TV and later in severel movies. The character died in the 1994 feature “Star Trek – Generations.”