THE BEATLES' FIRST CONCERT STAGE IS UP FOR SALE: JULIEN'S AUCTIONS

The very stage where The Beatles played their first concert is for sale. 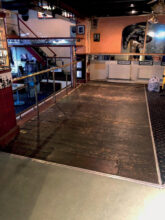 Julien’s Auctions is set to sell the stage from Lathom Hall in Liverpool,England.

The Beatles played there for one time under the name The Silver Beats on May 14th, 1960.

The stage is estimated to sell for $10-thousand and $20-thousand.

Other items for sale include Paul McCartney’s handwritten lyrics to Hey Jude, a baseball signed by all four Beatles from their final U.S. concert in San Francisco’s Candlestick Park, and Ringo Starr’s Abbey Road ashtray.

The auction will be April 10th in New York.