The NBA season has been indefinitely postponed after a player with the Utah Jazz tested positive for COVID-19. 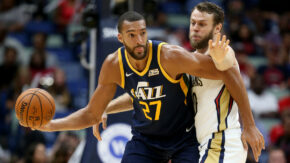 Rudy Gobert began to feel sick on Tuesday but was with the team until Wednesday, including when the Utah Jazz hosted the Toronto Raptors on Monday.

Gobert, who’s from France, underwent various tests until it was confirmed he had the new coronavirus.

Gobert is said to have been around people who had recently been in France.

As for the Toronto Raptors, the players have been told by the league to self-isolate.

After the World Health Organization declared COVID 19 a pandemic Wednesday, U.S. President Donald Trump made a stunning announcement in the evening.

“To keep new cases from entering our shores, we will be suspending all travel from Europe to the United States for the next 30 days. The new rules will go into effect Friday at midnight,” Trump explained in a nationwide address.

There is reaction to the U.S. travel ban from the Prime Minister’s office in Ottawa. A statement says, “we won’t comment on other countries’ approaches. We will continue to base our decisions in Canada on science and the best advice from our public health agency.”

There are now more than 120,000 cases in 114 countries and approximately 4300 deaths, including the one in Canada; a Vancouver long-term care resident in his 80s with pre-existing health conditions.

After the World Health Organization declared COVID-19 a pandemic Wednesday, our federal health minister said the Canadian government expects between 30-percent and 70-percent of Canadians could be infected if the pandemic reaches widespread transmission in this country.

Canada’s chief public health officer says of those who become sick, about six-percent would likely need intensive care base on the experience of other countries.

Meantime, U.S. government research has found that the novel coronavirus can linger for hours in the air, and even days on some surfaces. Researchers stress their work does not prove that anyone has been infected through breathing it from the air or by touching contaminated surfaces.

Despite the global fears of COVID-19, more than 60,000 people who contracted the disease have recovered.

Most have mild symptoms and rebound within two weeks, while those with more serious ailments, including pneumonia, may not improve for up to six weeks.