Ontario Premier Doug Ford has declared a state of emergency in the province over the COVID-19 pandemic.

“We’re taking this measure because we must offer our full support and every power possible to help our healthcare sector fight the spread of COVID-19,” Ford explained on Tuesday morning at Queen’s Park.

He went on to say this is an unprecedented time in our history and this decision was not made lightly.

“The first order under this declaration will be the prohibition of organized public events of over fifty people, including parades, events and services within places of worship until March the 31st.”

And Effective immediately, the premier announced the province has ordered the closure of all facilities providing indoor recreation programs, all public libraries, all private schools, all licensed childcare centres, all theatres, cinemas and concert venues, and all bars and restaurants except to provide takeout food and delivery.

Ford says this is not a provincial shut down and the majority of businesses won’t be affected by the order.

He reassured that essential services such as grocery stores, pharmacies and public transit will continue to operate. 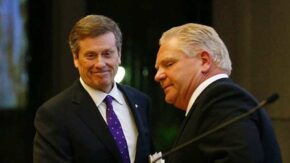 In response, Toronto Mayor John Tory has issued a statement saying he spoke with Premier Doug Ford, Municipal Affairs Minister Steve Clark, and Solicitor General Sylvia Jones this morning and thanked them for this decisive action and told them he fully supports this declaration.

Prime Minister Justin Trudeau is also going to have more to say later Tuesday morning about the federal government’s response to the novel coronavirus pandemic.

On Monday, he promised that details of a spending package would be announced soon.

Following the announcement the government is closing its borders as of tomorrow to most foreign nationals, WestJet announced Monday night it is suspending all commercial international and transborder flights for 30 days.