Chef Floyd Cardoz, who competed on “Top Chef,” won “Top Chef Masters” and operated successful restaurants in both India and New York, has died of complications from the coronavirus. 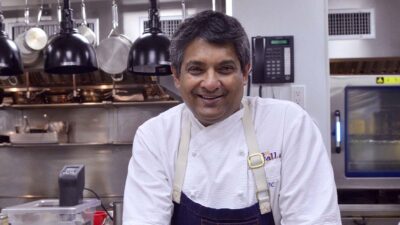 Cardoz had travelled from Mumbai to New York through Frankfurt, Germany, on March 8th.

A statement from his publicist says he was admitted a week ago to Mountainside Medical Center in Montclair, New Jersey, with a fever and subsequently tested positive for Covid-19.

The committed advocate of making the food industry more sustainable began his hospitality training in his native Bombay.

He later moved to Switzerland, where he honed his skills in French, Italian and Indian cuisine before moving on to the kitchens of New York City.

He was a partner in Bombay Sweet Shop, O Pedro and The Bombay Canteen in India at the time of his death.

Cardoz’s death was mourned by famous friends in both the restaurant and television industries.

The Twitter account for “Top Chef” offered condolences and called Cardoz an “inspiration to chefs around the world.”