Seventy-one additional TTC buses have been added to the busiest early morning routes to reduce crowding and help limit the spread of COVID-19. 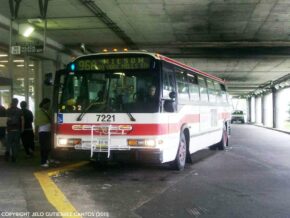 The extra buses were put into services Wednesday morning, just a day after the TTC began encouraging some riders to consider delaying their commutes until after 7:30 when buses tend to be less full.

The TTC says that a total of 15 different routes will get the additional buses for now, including the 300 Bloor-Danforth Blue Night service (five extra buses) and the 320 Yonge Blue Night Service (4 extra buses).

“This is redeployed service and an increase in operator availability. This is a work in progress and we will monitor,” TTC spokesperson Stuart Green said in a message posted to Twitter.

Despite the increase in buses, the TTC is still asking riders to delay non-essential trips to later in the morning if possible.

The following routes are getting additional buses for the morning commute: