The US National Gallery in Washington is returning a Picasso work to the family of a German Jewish banker who was forced to sell the under duress when the Nazis took power.  But in this case, the museum says it’s returning the work, not because it’s decided the claim has merit but, to avoid the cost of litigation. 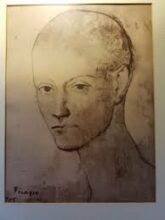 A pastel drawing by the Spanish artist, called “Head of a Woman,” from his 1903 Blue Period, is one of at least 16 masterpieces that banker Paul von Mendelssohn-Bartholdy sold in the months after the Nazis seized power and before he died in 1935.

The banker was a relative of the composer Felix Mendelssohn and the philosopher Moses Mendelssohn.  He was ousted from the Central Association of German Banks and Bankers in 1933 and from the board of the Reich Insurance Office in 1934.  The family bank was “aryanised” – “transferred to non-Jewish ownership” in 1938.

The National Gallery of Art says it acquired the pastel as a donation in 2001.