The release of best and worst case scenario numbers in Ontario Friday, is likely to put pressure on the governing Liberals in Ottawa to provide a national picture of the potential progression of COVID-19.

Prime Minister Justin Trudeau has said such national modelling is coming soon, but requires more data from provincial and territorial governments; a subject he is said to have discussed with premiers during a more than two-hour first ministers’ conference call Thursday evening.

Federal experts are hoping the national projections will be available within the next five days. 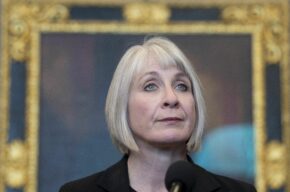 Three weeks ago, Federal Health Minister Patty Hajdu estimated that 30 to 70 per cent of Canadians could become infected with the new coronavirus. That number is somewhere between 11-million and 26-million people.

In an interview Thursday night, Hajdu said that estimate has not changed.

Public health experts in Ontario are set to release data Friday showing how many people could die of COVID-19 under a number of different scenarios.

Premier Doug Ford says the numbers may be hard to hear and should serve as a wake-up call for some Ontario residents. It’s a chance of course for the premier, who said on Wednesday he did not want to release the numbers for fear of causing panic.

As for Friday at 4am, there are 11,283 confirmed and presumptive cases of COVID-19 in Canada, including 138 related deaths and 1,968 resolved cases.