Tributes are coming in after the death of Canadian acting veteran Shirley Douglas.

She was probably best know for playing May Bailey, the domineering matriarch on the TV series “Wind at My Back.” 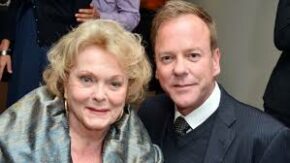 She was mother of actor Keifer Southerland and the daughter of medicare founder Tommy Douglas.

Douglas was married to actor Donald Sutherland in the 1960s.  He told the Canadian Press that his late, ex-wife was a “force of nature.”

Shirley Douglas died over the weekend of pneumonia complications unrelated to COVID-19.

The lights of Toronto’s Royal Alexandra theatre will be dimmed Tuesday night in her memory.