STEPHEN FRY TO THE RESCUE AGAIN

British comedic actor Stephen Fry is behind a new online radio play that will raise funds for the theatre industry. 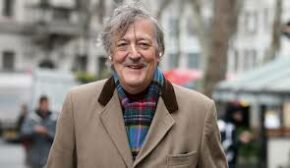 The 62 year old, who brought his one man show “Mythos” to the Shaw Festival in 2018, will star in a radio play called “The Understudy.”  It’s the story of a struggling actor who is hired to understudy a film star in a West End show.

It’ll be broadcast on line in two parts next month to members of the public who have  bought an e-ticket for the Canadian equivalent of about $9.00.

All the actors involved will record their lines separately at home and Fry says he hopes lots of people will “combine a good time with support for our wonderful theatre industry”.

Proceeds will be donated to the Theatre Development Trust, Acting for Others and other charities.