It’s a story of hope during the COVID-19 pandemic.

An 89 year old woman, who is living at a Markham long term care home in the midst of a COVID-19 outbreak, has recovered from the virus. 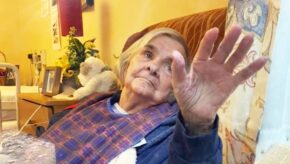 (Margaret McCormick, 89, is seen in this photograph posted to social media. Facebook/Sandy McCormick)

Margaret McCormick, who has dementia and is a resident of Markhaven Home For Seniors, started to develop a mild fever and cough early in March. A week later, her son William McCormick says the family received a test confirming his mother had contracted COVID-19.

He says the diagnosis was devastating and he thought the worst was to come.

But Margaret appears to have recovered.

She has been in isolation for about three weeks and has not had a fever in more than a week. Her son says the family is waiting for the final test results but they’re confident she will recover.

He calls her a fighter and feisty, and says this is all pretty amazing ahead of his mother’s 90th birthday in August.