ONTARIO ONLY USING A QUARTER OF COVID-19 TESTING CAPACITY

Word from Ontario’s health ministry is that the province should be able to start testing more people for COVID-19 soon.

A spokesperson for the Health Minister says Ontario’s capacity stands at 13,000 tests a day despite numbers suggesting the actual number of daily tests is much lower. 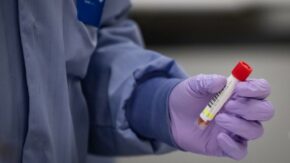 A published report says the testing labs have processed tests for fewer than 4000 patients a day since Sunday.

And Tuesday, it was reported by the provincial government that tests for 2568 patients had been completed, the lowest total in a week and a drop of more than 3500 since April 1st.

Experts say the decline in testing numbers makes it difficult to tell whether Ontario has truly flattened the curve or if it’s simply not testing enough to find the cases that do exist in the community.

On a per-capita basis, Ontario is testing for COVID-19 at a lower rate than Canada’s other big provinces; below B.C. and less than half of those in Quebec and Alberta.