NO DATE FOR REOPENING PROVINCE BUT IT WILL BEGIN WITH A TRICKLE: PREMIER FORD

Ontario’s Premier is backtracking on comments he made Wednesday morning about the province starting to reopen around May 24th.

When asked during an interview with an Ottawa radio station if Ontario could begin reopening by then, Doug Ford said, “yes.” 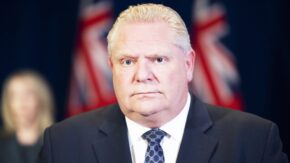 But later in the day, Ford clarified his position on reopening the economy over the May long weekend, saying, “that is absolutely NOT going to happen.”

“There’s never going to be one date that we just open up the economy,” Ford offered, “We’re going to open it up with a trickle and let it flow from there and constantly measure.”

And even then, Toronto’s Chief Medical officer of health, Dr. Eileen de Villa says there will still be an emphasis on physical distancing.

“We would certainly be trying to avoid crowding and congregations and large gatherings,” de Villa explained.

In Ontario, the latest official number is 12,245 confirmed cases of COVID-19, including 659 related deaths. Nearly half of those deaths are in long term care homes where there are 127 separate outbreaks.