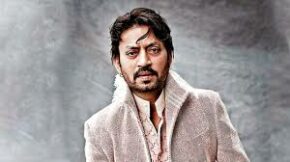 In 2018, Khan revealed he had an endocrine tumour and underwent treatment in a London hospital.  He’d recently been admitted to hospital with a colon infection.