Ontario Premier Doug Ford urged people to get tested for COVID-19 if they wanted to, while admonishing Torontonians who crowded into a popular downtown park Saturday. 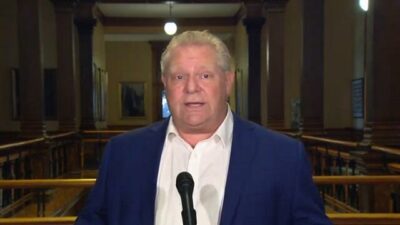 Ford said the only way to reach testing capacity in the province is for people to get tested, and said asymptomatic people will not be turned away at assessment centres during a televised address today.

The new directive for asymptomatic people to get tested is a marked change from earlier guidelines that said only people displaying symptoms are able to be tested.

Ford said the province will also unveil a new testing strategy that will focus on specific sectors next week.

The premier warned that a negative test doesn’t necessarily mean that a person is in the clear, and said people should get tested again if they start to display symptoms.

Meanwhile, Ford said he was disappointed to see thousands of people crowding at Trinity Bellwoods Park on Saturday, saying a dangerous virus is still among us.