Toronto’s mayor says he’s hopeful that an anti-black racism protest planned for this city on Saturday is as peaceful as the one last weekend.

“We should have protests sure, if that’s what people feel is going to move things forward and draw more attention, which is perfectly warranted,” Tory explained to CP24, “But let’s keep it that way (peaceful) because that’s the way we do things here. The police are on top of it, they’re aware of all the things that happen back and forth in terms of posters and social media traffic and so on, and they will do their very best to keep the city safe. That’s their job and I know they will do that this weekend as well as any other time.”

A release from Black Lives Matter says the protest is scheduled to begin at Trinity Bellwoods Park at 2pm on Saturday June 6th. 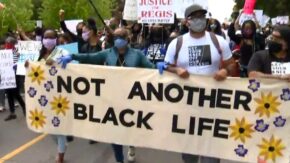 Last weekend in Toronto, a peaceful march was held in honour of Regis Korchinski-Pacquet, the 29 year old black woman who fell to hear death from a 24th floor apartment balcony in the High Park area during an interaction with Toronto Police. That case is being probed by the province’s Special Investigations Unit.