Members of the Canadian Armed Forces working inside long-term care homes could find themselves testifying about the state of those facilities in relation to lawsuits against the institutions. 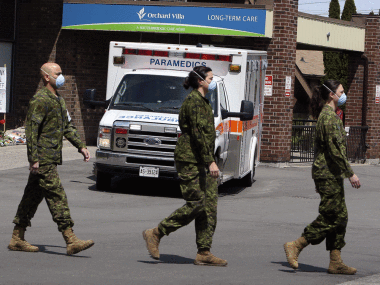 The unusual scenario follows the deployment of hundreds of service members in April and May to more than two-dozen nursing homes in Ontario and Quebec hit hard by COVID-19.

Damning military reports later said the troops found cases of abuse and negligence in the homes, including bug infestations, aggressive feeding of residents that caused choking, bleeding infections and residents left crying for help for hours.

Stephen Birman and Lucy Jackson of Toronto law firm Thomson Rogers are leading a proposed $20 million dollar class-action lawsuit brought against the Altamonte Care Community on behalf of the Toronto home’s residents and their families.

They say the troops’ firsthand observations could be critical in proving their clients’ claims against the home and that they plan to try to collect service members’ statements during the course of their lawsuit.

The Department of National Defence says military personnel have an obligation to report their observations about any mission and acknowledges they can be called upon as witnesses in legal proceedings.