BILL AND TED HAVE ANOTHER EXCELLENT ADVENTURE

Fans of the two biggest slackers in the world will be pleased with this. 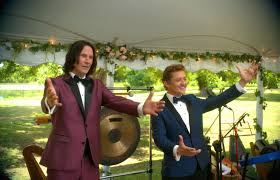 William “Bill” Preston and Theodore “Ted” Logan are back and ready to set out to finally write the song that will save the universe.

Toronto’s Keanu Reeves and Alex Winter are ready for another excellent adventure reprising their roles in “BIll and Ted Three; Face the Music,” which is set to open in theaters August 21st.

The 55-year-old Reeves, who holds Canadian citizenship was born in Beirut, grew up in Toronto.

He earned his acting chops at the Etobicoke School of the Arts and in a number of Toronto theatre productions before relocating to the United States.