There are allegations of “neglect” at a Woodbridge nursing home during a COVID-19 outbreak.

The governing PCs at Queen’s Park are facing questions about an elderly resident of Woodbridge Vista Care Community who reportedly died from a lack of food before the troubled facility was taken over by William Osler Health System in Brampton. 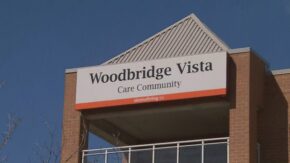 The resident was 82 year old Pietro Bruccoleri, who had tested negative for the virus. A coroner determined the man died of inanition, defined by exhaustion caused by malnutrition. The family of the man says Bruccoleri had advanced dementia, but was a good eater and they had no concerns about his health status or care before pandemic restrictions in March left them unable to visit.

Investigators with the Ministry of Long Term Care are apparently on site, as members of a military team begin a mission of mercy at Woodbridge Vista Care Community, the second at a nursing home owned by parent company Sienna Senior Living.

A ministry spokesperson says the investigators are looking into critical incidents and complaints, as well as non-COVID 19 related deaths and neglect in the home.

NDP Leader Andrea Horwath is accusing the Ford government of waiting too long before issuing a takeover order last Thursday for the nursing home, which has had at least 21 residents die after contracting COVID 19.

The office of Long Term Care Minister Merilee Fullerton did not explain why the Woodbridge Vista takeover was not ordered sooner.