Rayshard Brooks was chatting cooperatively with Atlanta police, saying he’d had a couple of drinks to celebrate his daughter’s birthday and agreeing to a breath test, after police were called late Friday over complaints of a car blocking the drive through lane of a Wendy’s restaurant. 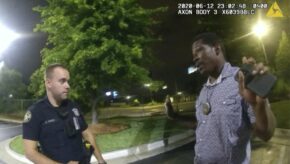 The officer does not tell Brooks the results, but his body camera recorded a digital readout of 0.108, higher than the 0.08 blood alcohol content considered too intoxicated to drive in Georgia. The officer then tells Brooks, you’ve had too much to drink to be driving. He then asks him to put his hands behind his back to be handcuffed.

Moments later, Brooks, who was black and the two white officers are seen on video dash cam wrestling on the ground and grappling over a taser before Brooks took the weapon and ran.

It is in the seconds after, Brooks is seen turning the taser toward an officer. And in the same moments, three gunshots were fired by the officer and Brooks fell and was later declared dead.

The tragic event has rekindled fiery protests in Atlanta and prompted the police chief’s resignation. One of the officers has been fired the other placed on leave.

Andy Harvey has written books and developed training on community policing. He’s also the chief of police in Ennis, Texas. He says such moments can turn in a split second.

“The moment you put your hands on someone is when someone will decide wheter to comply or resist,” Harvey explained, “That’s what happened in Atlanta.”

Investigators with the Georgia Bureau of Investigation will present their findings to prosecutors, who will then determine if charges are laid against the officers.