Ontario’s front-line healthcare workers still have not received the pandemic pay premium they were promised by the Ford Progressive Conservatives at Queen’s Park two months ago.

A spokesperson for Health Minister Christine Elliott acknowledges there has been a delay in paying the nearly 375,000 employees, but promises the cash is coming soon, although no date has been given.

In April, Premier Doug Ford announced a four dollar hourly raise for front-line staff over the following four months and a monthly bonus of $250 for those working more than 100 hours a month. 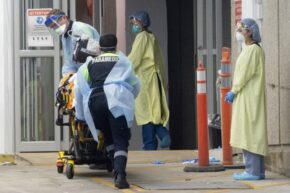 The bonus was to be offered to staff at long term care homes, emergency shelters, supportive housing, social services congregate care settings, and corrections institutions, along with home and community care providers and some staff in hospitals.

The program was later expanded to include more workers such as public health nurses and paramedics.