Brampton mayor Patrick Brown is providing more information and speaking out about the horrific crash in his city Thursday afternoon which took the lives of a 37 year old Caledon woman and her three young daughters.

“It makes you angry to think you have a 20 year old driving like they were on a freeway with a prohibitive license with no regard for human life…because you’ve got this beautiful family, and their life has been stolen,” Brown told CP24 Friday morning. 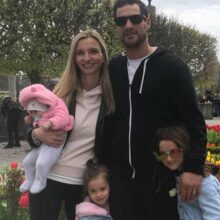 (Sources tell the Toronto Sun Karolina Ciasullo and her three daughters, Clara, 6, Liliana, 4, and Mila, 1, were travelling in a white van that was struck by a blue Infiniti in Brampton Thursday. The mother and her children all died from their injuries. FACEBOOK)

Witnesses say a police cruiser was following behind a speeding vehicle at the time when the blue Infiniti crashed into a van in the intersection of Torbram Road and Countryside Drive.

The van was completely mangled in the crash.

The 20 year old man in the Infiniti is being treated for his injuries in hospital.

Brown says “police were first aware of this person because a call came in 30 minutes before to the OPP of erratic reckless driving and that this person’s had multiple offenses, which is why they had a prohibited license. So you have a person where the plates don’t match the car, a repeat offender and the notice that this reckless individual was so selfish that they would go about their racing and whatever they are on, and cause a family to lose their lives.”

Brown says he believes this is a case of criminal negligence causing death.

The province’s Special Investigations Unit is investigating the crash, as it does in every incident involving police and a member of the public that results in death, serious injury or an allegation of sexual assault.