The Black Lives Matter movement has now claimed a statue of a former U.S. President. 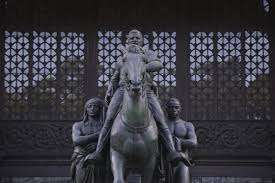 The statue to be removed features Theodore “Teddy” Roosevelt, on horseback and flanked by a Native American man and an African man.  It’s presided over the entrance to the American Museum of Natural History in New York since 1940, but has long prompted objections as a symbol of colonialism and racism.

Theodore Roosevelt was the 26th President of the United States, in office from 1901 to 1909.