China has issued a new warning to Canada in retaliation over Ottawa’s decision to suspend an extradition treaty with Hong Kong and stop exports of sensitive military gear because of a new national security law.

China’s foreign minister said Monday that China strongly condemns this and reserves the right for a further response.

Zhao Lijian went on to say China urges Canada to immediately correct its mistakes and stop interfering in Hong Kong affairs and China’s internal affairs in any way, so as to avoid further damage to China-Canada relations.

China also warned its citizens on Monday to exercise caution in traveling to Canada, citing “frequent violent actions” by law enforcement, amid ongoing tensions between Beijing and Ottawa.

The warning, published by the Chinese embassy in China on the WeChat messaging app platform, said Chinese citizens should pay close to the local security situation. It did not give specific examples on the violent actions.

On Friday, Prime Minister Justin Trudeau announced that Canada’s latest decision is based on our belief in the “one country, two systems framework” referring to the semi-autonomous model adopted after Britain returned Hong Kong to China in 1997. 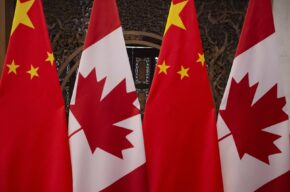 Relations between Canada and China have been tense because of extradition proceedings underway against an executive of the Chinese telecommunications giant Huawei, who is wanted in the U.S. on suspicion of violating sanctions against Iran.

Trudeau recently rejected calls for him to intervene and trade that executive, Meng Wanzhou, for two Canadians, Michael Spavor and Michael Kovrig, held in China on charges of espionage.