Hundreds of Toronto residents are expected to speak at a series of town hall meetings on police reform which get underway today. Click here to watch.

The meetings are being hosted by members of the Toronto Police Services Board, including Mayor John Tory, and will be held over four days to accommodate everyone who has signed up to speak. 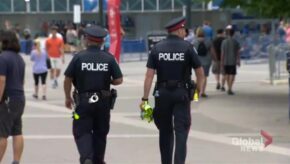 The calls for police reform come in the wake of the police killing of George Floyd in Minneapolis, and the death of Regis Korchinski-Paquet, a black woman who fell from her balcony while police were in her Toronto home. Her family members allege that Korchinski-Paquet’s race played into her death after police were called to her apartment while she was having a mental health crisis.

Last week, Toronto city councillors voted against a cut to the Toronto police budget, but passed a motion proposing a suite of changes to policing. These include anti-racism measures, response to those in crises and the implementation of body-worn cameras for police.

Proponents of the police use of body cameras say that the cameras create transparency and accountability and reduce police and anti-police violence. They also say that body cameras provide evidence that proves or disproves police misconduct allegations; and that they are a good tool for police training and have strong support from the public.

Opponents of the police use of body cameras say that the cameras negatively affect the physical and mental health of officers by overburdening them with equipment and placing them under the stress of constant video surveillance. They say that they increase the risk that sensitive or vulnerable victims and witnesses of crimes are exposed, and that their use damages community trust. They also say that they are too expensive and unreliable.