She was married to John Travolta for 28 years and fought breast cancer for the past two. 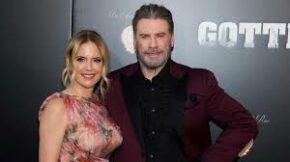 Preston had a lengthy career in film and television, appearing in movies like “Jerry Maguire,” and working with her husband in “Battlefield Earth” and `”Gotti.”

They met in Paris on a movie set in 1991. They had three children together. Their son Jett died after suffering a seizure in the Bahamas in 2009.