PICASSO PORTRAIT EXPECTED TO FETCH UP TO $1.6 MILLION AT HEFFEL ONLINE AUCTION

A portrait by Pablo Picasso is among the artworks on offer at Heffel Fine Art Auction House’s virtual sale Wednesday. 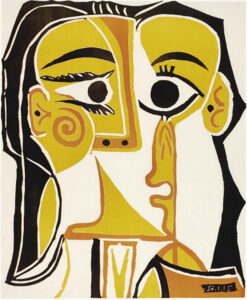 Heffel says “Tete de femme,” an oil-on-canvas painted by Picasso in 1939, could fetch between $1.2 million and $1.6 million dollars.

Heffel says it’s recreating the real-time excitement of an in-person auction with its new live online bidding system. Prospective buyers can also place bids by phone, or can submit their offers before the sale starts.

Highlights include Canadian artist Alex Colville’s 1976 painting “Dog and Bridge,” which is expected to hammer down for between $800 thousand and $1.2 million dollars.

Heffel is also selling several works from the Group of Seven and associated artists.

But after being uncovered by relatives earlier this year, the sketch is on sale for a pre-auction estimate of $125 to $175 thousand dollars.

Among three works on offer from Emily Carr is the 1929 canvas “Forest Interior,” which has been valued at $150 to $200 thousand dollars.