Champion hoop dancer Nakotah LaRance, who travelled the world performing with Cirque du Soleil and then returned to New Mexico to coach youth dancers, has died at the age of 30. 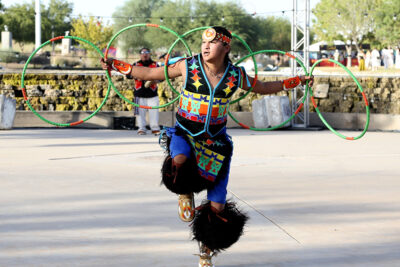 LaRance, who was Tewa, Hopi, Navajo and Assiniboine, died Sunday after he accidentally fell from a bridge in New Mexico’s Rio Arriba County.

His father took him to a powwow where he met champion hoop dancer Derrick Davis, who made him his first set of hoops and started teaching him how to dance.

Native hoop dancing involves doing intricate footwork while twirling and throwing hoops in the air and manipulating them into shapes such as wings, tails, an open alligator mouth or a sphere.

Dan Hagerty, director of strategic development and planning at the Heard Museum in Phoenix, says “Nakotah was known for delivering fearless and thrilling performances.”

He adds “His risk-taking in the hoop arena resulted in unforgettable performances, and he will forever remain a fan favourite.”

LaRance also performed on N-B-C’s “Tonight Show” with Jay Leno, which led to some acting roles, including a part in Steven Spielberg’s 2005 television series “Into the West.”

In 2009, at the age of 20, Nakotah became a principal dancer with Cirque du Soleil and travelled the world performing in its shows for more than three years.