She was a mainstay at New York’s Metropolitan Opera in the 1960s singing 20 roles over 13 consecutive seasons. 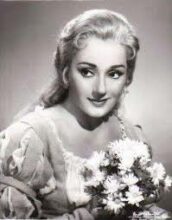 She started her career in Italy in the 1950s. During her prime years she earned consistent respect from critics and loyal fans but tended to be overshadowed by sopranos including Maria Callas, Renata Tebaldi and Leontyne Price.

In a 2002 interview with Opera News, she attributed the confidence of her singing to good technique and common sense.