GET READY FOR NEXT PHASE OF GARDINER EXPRESSWAY LANE REDUCTIONS

The City of Toronto is boasting a construction milestone in the Strategic Rehabilitation of the Gardiner Expressway between Jarvis and Cherry Streets. 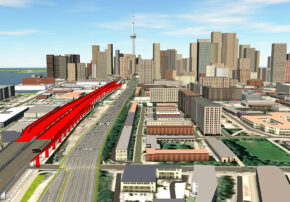 At 12:01 a.m. on Sunday July 26th, the westbound off-ramp to Yonge-Bay-York Streets will reopen to traffic.

Two lanes of traffic in each direction will be maintained on the newly completed north half of the expressway from the Don Valley Parkway (DVP) to York Street. The project is on-track for completion by Spring 2021.

From Saturday, July 25 to Monday, July 27, there will be traffic restrictions on the Gardiner Expressway from the DVP to Jarvis Street to safely transition the work zone.

Due to the transition, the ActiveTO major road closures on Lake Shore Boulevard East from Leslie Street to just south of Woodbine Avenue and Bayview Avenue from Front Street East to Rosedale Valley Road will be cancelled this weekend, July 25th and 26th.

The ActiveTO closure will continue to take place on Lake Shore Boulevard West from Windermere Avenue to Stadium Road.

On the Civic Holiday long weekend, Saturday, August 1st to Monday August 3th, all ActiveTO major road closures are expected to be in effect.