IT'S BEEN 2 YEARS SINCE DEADLY DANFORTH SHOOTING, CEREMONY TO BE HELD WEDNESDAY

Today, Wednesday July 22nd, marks the second anniversary of the deadly shooting on The Danforth.

It was two years ago that a gunman opened fire along a busy stretch of Toronto’s Greektown.

Reese Fallon, who was 18, and 10-year-old Julianna Kozis were both killed in the shooting.

Thirteen others were injured.

The gunman took his own life later that evening. 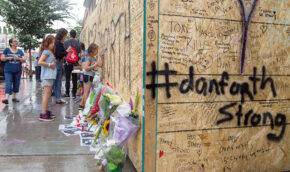 A commemoration ceremony is set to take place Wednesday afternoon.

“I think of the citizens who ran to rescue and help people that were shot, and I think of the first responders who did a magnificent job of trying to protect the public and comfort the wounded,” Mayor Tory told CP24.