CLASHES IN BEIRUT AMID FURY OVER MASSIVE BLAST 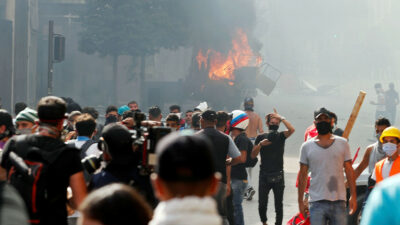 The confrontation comes amid mounting fury over the massive explosion that devastated large parts of the Lebanese capital.

Thousands of people have poured into Beirut’s main square, where symbolic nooses have been put up for the officials they say should be hanged over this week’s deadly blast.

The country’s ruling class is blamed for widespread corruption, incompetence and mismanagement that contributed to the explosion, the biggest in Lebanon’s history.